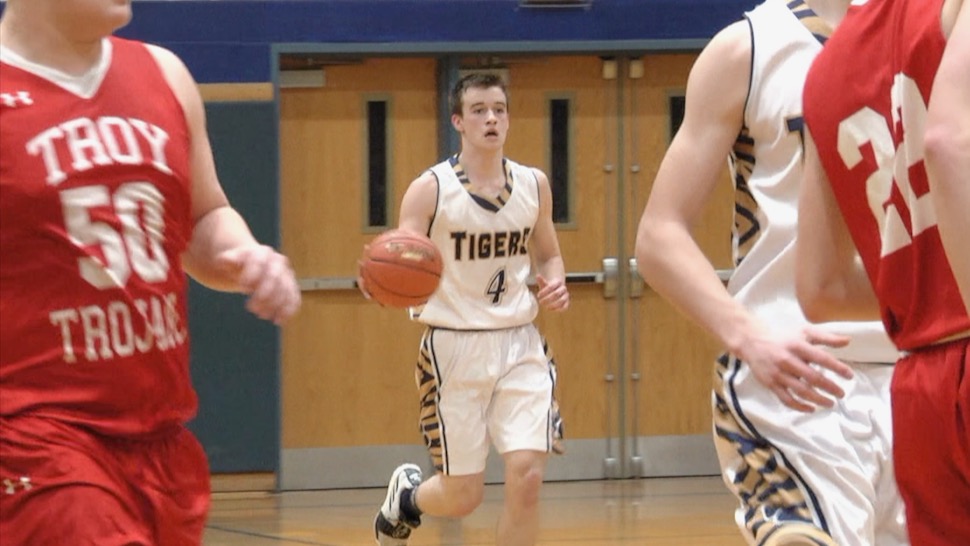 A 22-7 3rd quarter gave the North Penn-Mansfield Boys Basketball team a lead heading into the 4th quarter but it wasn't enough as Troy edged the Tigers, 52-47 on Saturday, January 25.

The Trojans built a 9-2 lead midway through the 1st quarter as the Tigers struggled from the field until a three from Jacob Evans late in the quarter cut the Trojans' lead to 5 at 11-6. Troy would lead 14-8 after the opening quarter, then built their lead up to 26-15 at halftime as the Tigers continued to struggle from the field.

The 3rd quarter, however, was a completely different story. Similar to Tuesday's rivalry game with Wellsboro, the Tigers put together a 20-plus point quarter to get back in the game, and unlike Tuesday, they held the lead at the end of the quarter. Mansfield scored 5 quick points in just under a minute and 20 seconds to make it a 6-point game and force Troy to burn a timeout.

Troy worked their way back in the game, and would eventually retake the lead at 39-37 with 5:30 remaining. Both teams continued trading the lead late until the Tigers retook the lead on an Evans' 3-pointer with 1:37 to go. On the next trip down the court Troy would tie the game on a foul shot, then would retake the lead at 49-47 with 16.2 seconds to go on a Ty Barrett layup.

"Hats off to Troy, they played hard and got a big win on the road," added Burleigh.

Tokarz and Evans both finished with 15 points to lead the Tigers while Curtis Craig had 5 points, Brody Burleigh and Alex Stein had 4 points each, Sam Lawrence added 3 points, and Dominick Garverick rounded out the scoring with a point.

The loss drops the Tigers to 9-8 (6-5 NTL Large School Division). The team is back in action on Tuesday, January 28 on the road in Wyalusing.

Ed Weaver is the owner of Circle W Sports in Wellsboro, PA, is the Sports Director for The Home Page Network and the creator of WellsboroAthletics.com and WellsboroFootball.com. You can follow him on Twitter or friend him on Facebook.